Create an Account - Increase your productivity, customize your experience, and engage in information you care about.

What should I do if a coyote attacks?

Call 911 if you see a Coyote acting strangely.

Coyotes attacking humans should be presumed to have rabies.
Anyone who is bitten or scratched by a coyote should seek medical attention at the nearest hospital emergency room.

All animal bites must be reported to the Westchester County Health Department to assess the need for life saving rabies treatment.

Animal bites can be reported 24 hours a day by calling 914-813-5000.
If your pet has a conflict with a coyote, contact your veterinarian.

What should I do if a coyote approaches?
Do not try to catch the coyote unless you are a trained animal trapper.

Do make a lot of noise and throw items at the coyote.

Coyotes that have conflicts with people may also have been fed by humans, thus making them less afraid of approaching humans.

If there have been coyote sightings in your area, please consider keeping small children & pets inside or limit outside activity if not in well populated areas.

If a coyote approaches you, act aggressively: stand tall, shout, wave your arms & maintain eye contact – as you try to scare it away and to get yourself safely inside or to a more populated area.

Do not turn your back and run away – the coyote will then view you as prey and give chase.


The Coyote in NYS - Suny ESF 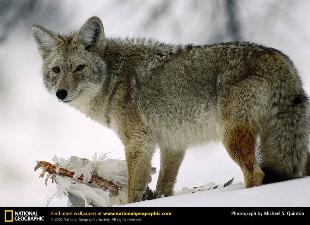 Description:
The Eastern coyote looks like a medium-sized German shepherd dog, with long thick fur. The tail is full and bushy, usually carried pointing down. Ears are erect and pointed.

Coyotes in Suburbia:
The Eastern coyote, commonly believed to live only in the more wild parts of New York, readily adapts to living close to people. Coyotes live throughout upstate New York. They have been sighted in parts of New York City, and are common in the suburbs north of the City. As unlikely as it may seem, human development makes surprisingly good coyote habitat. The abundant coyote food supply (e.g., rabbits, squirrels, deer, cats, small dogs, garbage, and pet food) makes living in close to people worthwhile. As coyotes increasingly adapt to people, more encounters between humans and coyotes will occur, either as sightings, confrontations with pets, disturbed garbage or pet foods, or howling at night. Some background on coyote habits may help people understand these encounters and solve any problems that occur. To minimize conflicts, it is important that suburban residents do their part to maintain the natural fear that coyotes have of people.

The Coyote Diet:
What do New York coyotes eat? A coyote's diet depends on one thing - what is easiest to find or catch and kill. During the summer, coyotes will feed heavily upon berries, insects, and rodents. During early fall they rely on abundant grasshoppers. Small mammals become the prey of choice during late fall and winter. As winter becomes harder and small mammal populations decline, coyotes turn toward their largest prey - whitetail deer. Deer killed by vehicles and other causes (carrion) can be an important food source for coyotes. Lacking any carrion, coyotes can, will, and do kill healthy adult deer. Coyotes in the spring time can have an impact on fawn survival in localized areas.

How Many Coyotes live in New York:
After hearing a family group of coyotes howl, it is easy to get the impression that the woods must be overflowing with coyotes. In reality there were probably five or six. A few coyotes make a tremendous amount of noise when they want to. The eastern coyote does not form a true 'pack' with multiple adults living together like their relative the wolf. Instead they are organized as a 'family unit'. Each family unit is made up of the adult pair and their pups from the current year. A family unit will defend a territory of 6 to 15 square miles against other coyotes. It is the territorial behavior of coyotes that limits their numbers in any one area. The coyote population in New York during the Summer is approximately 20,000-30,000.

Young of the year coyotes are driven from their parents' territory between September and March. These young coyotes travel up to one hundred miles in search of a vacant territory to claim as their own.

How Did Coyotes Arrive in New York?:
There are two theories to explain the presence of Eastern coyotes in New York. The first theory is that coyotes were here before Europeans settled North America. The clearing of the forest for farms and homes forced coyotes to retreat to unsettled areas of the northeast, e.g., the Adirondack mountains. The return of the forest during this century coincided with the return of the coyote.

The second, and more widely accepted theory, is that the Eastern coyote is a relatively new species in New York. This theory suggests that western coyotes extended their range eastward, eventually forming a distinct subspecies.

Whichever theory is true, coyotes have been present in New York at least since the 1930's, and firmly established themselves by the 1970's. They are here to stay.

Coyotes or Coydogs?:
The large canid which resides in New York is a true species; they are not a hybrid. The proper name is the Eastern Coyote, Canis latrans. Coyotes and dogs theoretically can interbreed to produce what is called a 'coydog'. However, these crossbreeds have a reproductive cycle of dogs, not coyotes, and will give birth at times of the year when the pups cannot possibly survive (i.e., January). In addition, there are behavioral differences between dogs and coyotes which prevent crossbreeding from occurring. Coyotes want to mate with other coyotes and not with dogs. Coyotes are actually more likely to prey upon a domestic dog instead of mating with it. It is in this manner that dog genes are prevented from entering the gene pool of true coyotes, maintaining the two separate species. Coydogs occurred at the leading edge
of coyote range expansion during the 1950 to early 1970's. The occurrence of a coydog would be an extremely rare event in New York today.

Coyote Hunting and Trapping:
Over 60,000 New Yorkers participate in coyote hunting each year and about 3,000 participate in coyote trapping. All of Upstate New York is open for coyote hunting and a small game hunting license is required to hunt coyotes. All of Upstate New York is also open for coyote trapping and a trapping license is required.

The Environmental Conservation Law allows 'problem coyotes' to be killed at other times of the year.

Section 11-0523 says coyotes that are "injuring private property may be taken by the owner, occupant or lessee... at any time in any manner."

Above information supplied by the NYS DEC.